So which iconic Tom Brady moment becomes the statue? 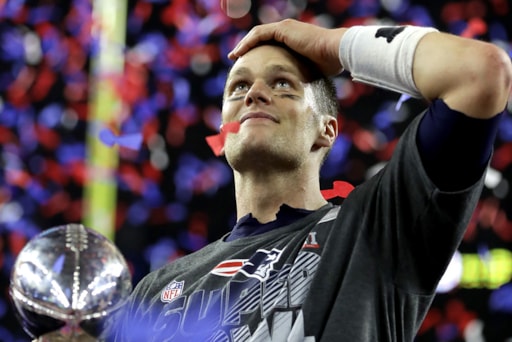 You know it’s coming. It’s going to tower over you as you traverse the main square at Patriot Place outside Gillette Stadium. It’ll cast a long shadow as the sun passes overhead. Like the Lincoln Memorial and other D.C. landmarks, it will take an in-person visit to Foxborough to understand its sheer size and scale.

The Tom Brady statue is coming some day. It’s time to start wondering what shape it will take.

For an athlete who engineered as many dramatic and iconic moments as he has, Brady has a curious lack of a singular defining image. There’s no one photo or moment that fans would collectively point to as the clear choice. Perhaps he’s accomplished so much that there’s no single capture that transcended the rest, like Bobby Orr flying through the air.

So it’s bound to become a good old-fashioned Sports Debate™ as to what image(s) should come to define the Brady statue. This thing isn’t going anywhere once it’s planted in Patriot Place, folks. This is a serious discussion. So let’s go over some of the general candidates…

Ultimately, it’s hard to believe that the Lombardi Trophy wouldn’t be incorporated in some way with the Brady statue. The guy won six of the things and there are more than enough photos to use for reference. So perhaps they go with something from Brady’s demonstrative gestures with the Lombardi after the Patriots won Super Bowl LI. They could also go the route of the image of Brady after winning his first Super Bowl, hands on his head, shaking in disbelief. Referencing the championships is the most obvious route to take.

On This Date: In 2002, Tom Brady led the Patriots to their first Super Bowl win, and a dynasty was born.

Brady had simple ways of showing his emotions when the adrenaline flowed. He fist-pumped with the best of them and had plenty of opportunities to celebrate touchdowns and wins with a flourish. There’s no one fist-pump that became a defining clip of Brady over the years, but there are all kinds of possibilities. One of the best-looking fist pump photos came from the Patriots’ unforgettable 2014 divisional round win over the Raven

Brady has also made for some exciting imagery with the way he took the field at Gillette Stadium. The simplest way to illustrate Brady’s legendary competitiveness and commanding leadership is to put the statue in full uniform letting out a lion’s roar for the fans. Bucs fans will get it soon enough with why Brady is considered the greatest of all time. It will start with the way he greets them on Sundays.

The Patriots dynasty truly marked its arrival with the first Super Bowl win over the Rams in 2001, but the famous snow game against the Raiders planted the seed. Go back and watch that game and you get some severely early glimpses of Brady’s budding greatness. His best image from that game came when he spiked the ball after trudging into the snow-covered end zone. Maybe not the ideal choice of a moment to memorialize with an actual statue, but one of Brady’s iconic moments for sure.

Brady has made a lot of signature plays, but one of his most famous wasn’t a throw at all. When Brady scrambled and juked the Bears’ Brian Urlacher, while the linebacker was in the midst of an All-Pro season, Brady gave fans a unique reason for why he was such a superior football player to his peers. I submit Brady’s subsequent first-down celebration as a wild card, dark horse kind of option for the statue.